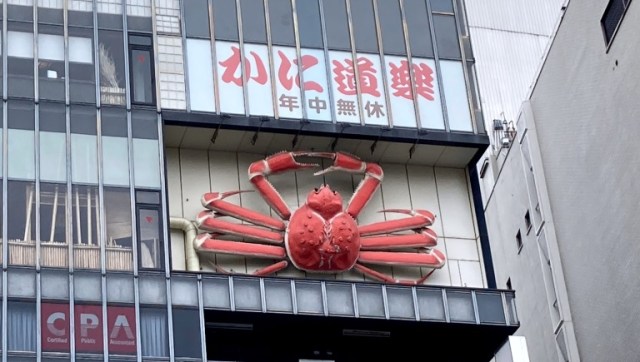 Mr. Sato’s hunger for the truth leads him to selflessly eat a bunch of seafood at Kani Doraku for the sake of our readers.

There are a lot of famous landmarks in Tokyo’s Shinjuku neighborhood, like the full-scale Godzilla head, the Studio Alta giant TV screen and meeting spot, and, of course, SoraNews24 headquarters. But while all of those fill passersby with a sensation of wonder and excitement, the Shinjuku landmark that most produces pangs of hunger is the giant moving crab sign.

That delicious-looking decoration adorns the Shinjuku Theatre Building, whose tenant on the seventh and eighth floors is the restaurant Kani Doraku, which translates to “Crab Amusement” or “Crab Indulgence.” It’s hard to not be mesmerized by the enticing movement of the mechanical crab’s legs and claws, but the other day our Japanese-language reporter Mr. Sato realized something. He’s never gone in and eaten at Kani Doraku.

It’s not like he hasn’t had the opportunity. Kani Doraku is just a few blocks away from the office, and Mr. Sato has walked underneath that mecha crab literally thousands of times on his way to and from work. Maybe it’s because Kani Doraku has been a part of Shinjuku’s urban landscape for years, and so he’s never been in any rush to go right now.

But as we’re seeing these days, sometimes Tokyo institutions don’t end up being as permanent as they once seemed, and so Mr. Sato decided it was finally time to find out if Kani Doraku’s food is as tasty as their sign is awesome. Filled with anticipation but empty of stomach, he made the walk from the office over to the restaurant on a Monday afternoon in order to treat himself to a luxurious lunch.

He was a little bummed out that the giant crab wasn’t moving on this day. It wasn’t broken, but had been turned off as part of an electricity-saving plan as the Tokyo power grid deals with increased demands during a huge heat wave. Even motionless, though, the giant crab still looked cool, and once Mr. Sato was inside the restaurant he was also impressed by the wooden statue of a bear chowing down on a salmon, a common carving motif in Hokkaido Prefecture, which is also where most of Japan’s crab is caught (though the Kani Doraku restaurant chain was founded in Osaka).

Kani Doraku isn’t kidding around with its name, as the menu is packed with all sorts of fancy multi-course crab meals, a la carte crab dishes like grilled crab legs or shabu shabu-style crab hot pot, and crab-centric lunch sets.

The multi-course meals start at 7,480 yen (US$55) and go up from there, while the lunch sets, which are served until 4 p.m., are more budget-friendly indulgences from 3,850 yen, not a bad deal for quality restaurant shellfish. Being the fiercely independent and individualistic kind of guy he is, though, Mr. Sato wanted complete control over his meal, and so he decided on three a la carte dishes. After he gave the waiter his order, a server brought him an oshibori, or moist towel. That’s not so unusual, as most restaurants in Japan will give you an oshibori, but the surprising thing was that Mr. Sato had already been given an oshibori when he first sat down, before placing his order. He figured the second oshibori is provided because eating crab can be a messy business, and so he began to think of the first towel as his “welcome oshibori.”

The chopstick set also looked unusual, with what appeared to be a toothpick sticking out of the paper wrapper.

It turns out, though, that this isn’t a toothpick, but a long, pointy tool to help you pull and scrape the meat out of crab shells.

▼ And yes, the ceramic chopstick rest was shaped like a crab.

Like we said, Mr. Sato didn’t order a pre-set meal, so let’s see what dishes he selected, and whether they turned out to be a seafood symphony or crustacean cacophony.

Crab isn’t cheap, but Mr. Sato’s wallet stopped any whining it might have been tempted to do when he got an eyeful of this. This isn’t a few measly strips of crabmeat that give the impression of seafood, but a very nicely sized slab of crab.

▼ The last time Mr. Sato had this much crab on his plate, it was the imitation kind, but this time it was the real deal!

You get plenty of vegetables, but really they’re here as the crab’s supporting cast. Each bite was primarily about the crab, with the veggies along for the ride, but it all came together wonderfully, making it one of the most satisfying seafood salads that Mr. Sato has had in his life.

Gratin is a baked pasta dish made with cheese, white sauce, and pasta. Though it’s now become a uniquely Japanese food, the initial influences come from overseas, and the unique idea of crab gratin, a combination Mr. Sato had never come across before, was too alluring for him to resist.

Though Kani Doraku is primarily known for its traditional Japanese fare, the Crab Gratin proves their chefs are skillful with this more Western-like recipe as well.

Along with a nicely sized crab claw, there’s shredded crab meat mixed in with the white sauce, delivering rich, creamy notes simultaneously with the flavor of the crab.

Switching gears from the crab gratin, Mr. Sato went all the way to the other end of the spectrum by ordering a crab sushi set. Can’t get more Japanese than that, right?

Arriving in a glitteringly gorgeous box were five types of crab sushi, starting with the orthodox nigiri-style…

…battera (where the topping is packed tight onto a squared-off block of rice made using a box-like wooden press), and kanimiso gunkan, made with crab innards and a slice of cucumber.

As much as Mr. Sato had enjoyed the salad and gratin, the sushi was even better…and by a wide margin. He’d have been totally satisfied after the first two dishes, and finding out that there was a level of crabby joy above even that was like the proverbial cherry on top of his crab sundae. Not that Kani Doraku actually offers crab sundaes, but by this point Mr. Sato was beginning to think that there’s no limit to their chefs’ skills when it comes to crab, so if they did decide to start serving crab sundaes, those would probably taste amazing too.

Really, there was only one thing that Mr. Sato didn’t like about his meal, and that was the baran, or decorative bamboo leaf placed amongst his sushi pieces. For a bit of artistic playfulness, Kani Doraku cuts their baran in the shape of, you guessed it, a crab, and while the little guy was cute, the shape of his mouth made it look like he was panicking or otherwise under great duress.

Seeing that, Mr. Sato felt just a little guilty, but with the flavors of the meal still lingering on his taste buds, he also felt very, very happy.

Is that restaurant in Tokyo with the giant mecha crab sign any good?

Thu Jul 14 , 2022
Nineteen Hyaku will occupy 5,000 square feet on the ground floor of the new tower at 1900 Broadway. The name is a nod to both the building’s address and the restaurant’s mission. “Hyaku” means “hundred” in Japanese, and Nineteen Hyaku owners Emily and Houston Carpenter of Carpenter Carpenter Hospitality said […]