Japan has a type of restaurant called “family restaurants“, and if you’ve spent much time in the country, you’ve probably been to one. They often offer a combination of basic Western-style and Japanese fare, including pastas, hamburg steaks, and teishoku set meals, for a reasonable price, and since there’s something for everyone there, that makes them great places for families to go out to eat together. They’re also popular for meals with friends and even, to some people, acceptable first date locations, so they’re just excellent all around!

Of course, not all family restaurants are the same. Some are more expensive, some have bigger menus, some offer alcohol and some don’t. But there are definitely some that stick in people’s minds as favorites. That’s why voter-based ranking website Goo Ranking decided to see which one is everyone’s favorite, but this time entirely based on cost performance. 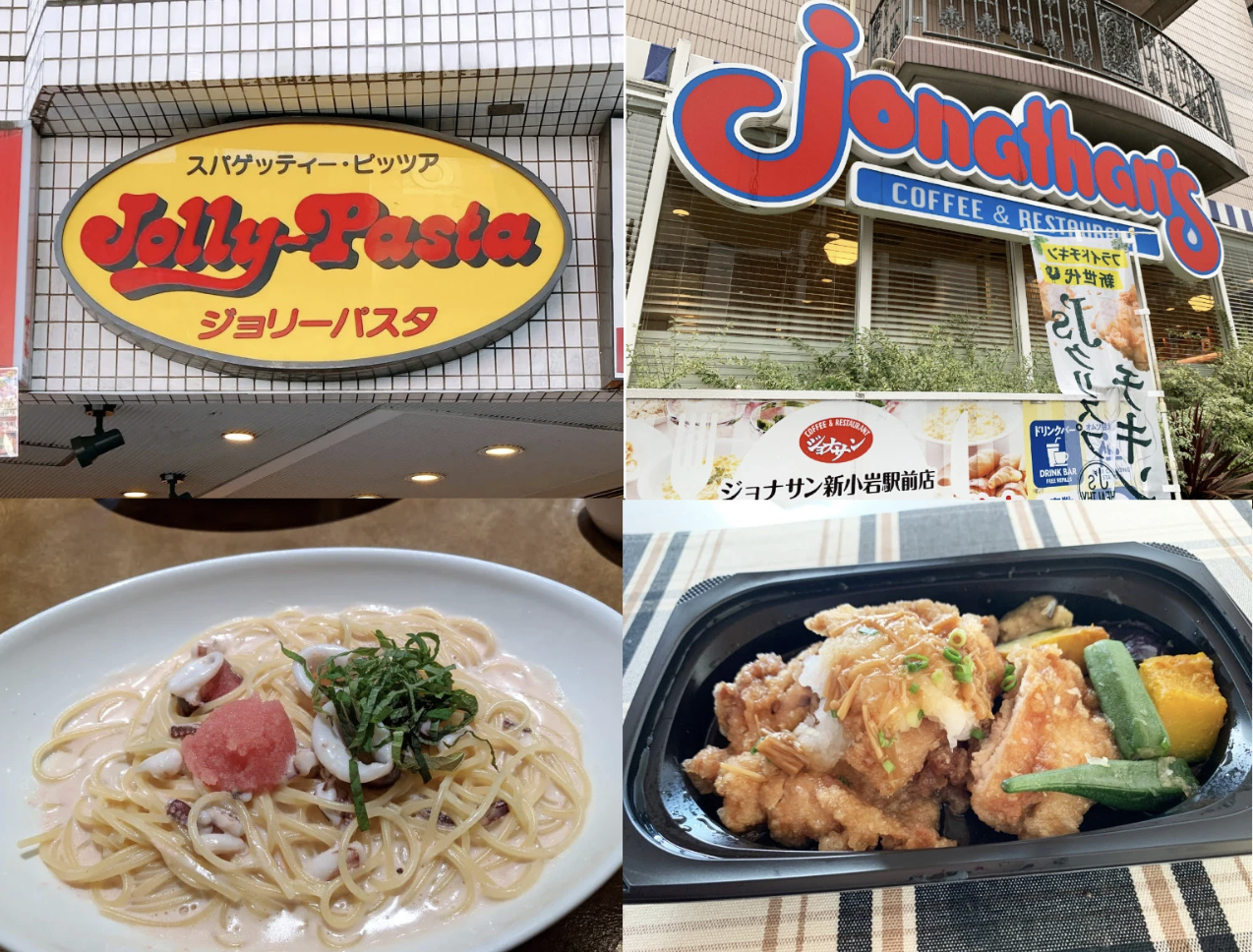 It’s no surprise that these ended up a little bit lower on the ranking, as their menus tend to be a bit more expensive than other family restaurants. Jonathan’s offers everything from Japanese food to western-style meat plates, pasta, and pizza starting at 699 yen and going as high as 1,499 yen, while Jolly Pasta focuses on pasta dishes averaging around 700 to 1,000 yen. Both restaurants offer a drink bar, which gives you unlimited refills of various kinds of soft drinks, teas, and coffees for a reasonable fee.

Big Boy is primarily a meat restaurant, serving sets with hamburg, steak, and chicken, which naturally results in their menu being a little more expensive. But, like any self-respecting family restaurant, they also have pasta and omelet rice, so unless you order steak or a huge portion of meat, you’ll still likely average under 1,000 yen per plate at Big Boy. They also offer a buffet bar with rice, salad, curry, and soup, in addition to a drink bar, so you can get a lot of food for a relatively low price.

Everyone likes to eat meat for a reasonable price, especially when it tends to be more expensive in general, which is why we aren’t surprised to see Steak Gusto on the list. But we didn’t expect it to beat out Jonathan’s or Big Boy. Steak Gusto’s all-meat entrée menu, in contrast to regular Gusto locations’ more diverse lineup, offers a wide variety of steaks in addition to hamburg and chicken, but plates average over 1,000 yen with similar portions to other restaurants. The most expensive dish is a 200-gram tenderloin steak for 2,594 yen. However, their buffet bar offers dessert as well as the standard salad, soup, rice, and curry, so perhaps the sides are where the best value is found.

Not to be confused with CoCo Ichibanya, just about everyone’s favorite curry chain, Coco’s Restaurant is a family restaurant serving your typical hamburg, pasta, pizza, and salads. Their prices are pretty average across the board, ranging from 600 yen to over 1,000 yen for steaks and meaty plates, so no matter what you order, you aren’t going to spend much. Also, their shaved ice in summer is amazing, so it’s worth it to visit just for that.

Bamiyan is unique in that it’s a family restaurant that serves primarily Chinese dishes like dumplings, chili shrimp, and stir-fries. They’re served more family style, so you order a bunch of small dishes for the table instead of individual plates for each diner (though can do that too). Most shareable dishes average less than 300 yen, though the main dishes are about 500 to 800 yen. Altogether, you probably won’t end up spending much, and you can get a huge variety of food for everyone to enjoy.

A hamburg specialty restaurant, Bikkuri Donkey sets itself apart from other meat-focused family restaurants by offering hamburg as big as 300 grams for reasonable prices. Their standard basic 300-gram hamburg set, for example, costs 1,200 yen, which is a pretty nice deal when other restaurants only offer 150 or 200-gram hamburg for that price. Bikkuri Donkey is great for meat lovers with a big appetite who don’t want to spend a lot.

A bit of a dark horse, Joyfull is a smaller family restaurant that has just 650 restaurants across the country, and its most prominent customer bases are found in Okinawa and Kyushu. Nevertheless, it’s earned its place as number three on the rankings of cost performance thanks to its 500-yen lunch menu, which allows you to choose two kinds of meat in addition to rice and a salad, and for just 50 yen more you can add the drink bar. For 100 yen more, you can also add dessert, unlimited rice refills, or miso soup. The amount of food you get makes this probably one of the best value lunches you could have.

Not to be confused with Steak Gusto (though operated by the same parent company), Gusto is one of the most popular family restaurants simply for the fact that they’re easy to find, since there are over 1,300 of them around the country. Their menu prices average around 800 yen, but where the best value lies is in their recently expanded alcohol and “bar food” menu. Their bar food generally comes in at less than 400 yen per plate, except for the beef stew dish and tuna yukhoe, and their alcoholic beverages range from 200 yen for a glass of wine to 500 yen for a mug of beer. They also have a daily weekday happy hour which drops the price of a mug of beer to 250 yen. It’s a great place for casual drinking, but also great for solo dining since some branches offer great solo booth amenities.

It won’ t be a shock to veteran family restaurant fans that Italian restaurant Saizeriya came out on top in as the chain with the best value. Their alcohol is the cheapest at just 100 yen per glass of wine, and their food comes out far cheaper than any of the other restaurants. Their basic hamburg steak, for example, is just 400 yen, and many of their basic pasta dishes come out to 300 or 400 yen. No food item on their menu is over 1,000 yen, including the steak, and most dishes are 600 yen or less. Saizeriya was also ranked the most satisfying restaurant of 2021, so you can’t go wrong bringing your family or friends to Saizeriya for a bargain meal.

Of course, these rankings are entirely subjective, and a lot more goes into the voting than you might think. Cost performance includes not only quantity of food for the price but always quality, service, variety, and lots of other things. For example, Royal Host didn’t make the list, but on our visit we found it had the best value breakfast, despite being the most expensive. If you’re looking to get started on the path to finding your own personal best-value family restaurant, though, this list of candidates is a great place to start.

— Hungry and on the go? Top 10 ranking of ekiben at Tokyo’s Shinagawa Station

Wed Aug 24 , 2022
NEWYou can now listen to Fox News articles! A woman in Houston says she was sent to the hospital after touching a napkin on her car door that was apparently poisoned. Erin Mims was at a Houston restaurant celebrating her birthday on Tuesday afternoon with her husband, but when the […] 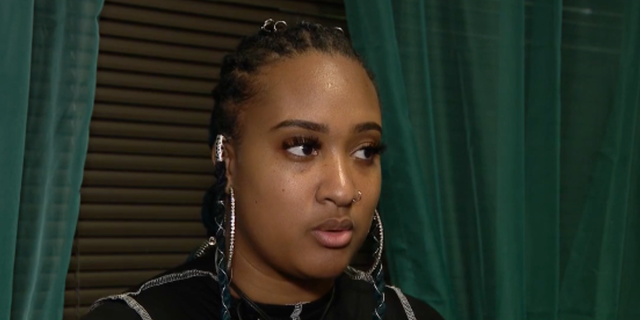