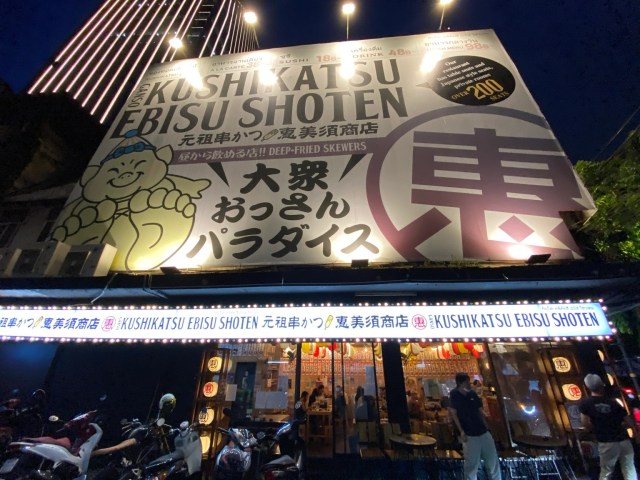 Thankfully our reporter lived to tell the tale.

Her recent travels took her to the streets of Bangkok, Thailand, although you might be forgiven for initially thinking Ikuna was still somewhere in Japan, given the number of signs written in Japanese in this picture. In fact, something Ikuna finds particularly charming about Bangkok is the abundance of Japanese signs out and about, which at times makes her feel like she’s travelling somewhere closer to home, like Okinawa.

But amongst all the Japanese restaurants dotting the streets of Thailand, Ikuna found one spot that managed to ‘out-Japanese’ all the rest; so much so that it felt like someone had teleported it directly from the middle of Osaka.

Ikuna had found an izakaya, a Japanese traditional pub. It’s called Ganso Kushikatsu Ebisu Shoten and has a huge neon sign proclaiming the place “a paradise for the common man“. More specifically, the term used for ‘man’ is ‘ossan‘, but ‘paradise for the middle-aged-and-slightly-uncool-common-man’ isn’t quite as punchy in English.

The pub specialises in kushikatsu, delicious deep-fried sticks of pretty much anything tasty. And while Ikuna was decidedly not an ossan, she couldn’t say no to a spot of kushikatsu, and decided to check it out.

It turned out this place is a paradise for ossan and non-ossan alike, as the restaurant was absolutely packed! By some stroke of luck, Ikuna was able to be seated quickly, but this was one of her first experiences in an izakaya unaccompanied. Izakaya pubs are usually a place to relax with some drinks and share a few nibbles with friends, and Ikuna was a little worried people might judge her for being there by herself. But as she looked around, she saw that she wasn’t the only solo diner there that night. In fact, there were a lot of old guys there by themselves, whom Ikuna suspected were Japanese ossan living in Thailand.

… and rice dishes and tempura were also available to order.

To get things started, Ikuna ordered the seared mackerel, which cost 148 baht (US$4.20). While there’s an image of food in Thailand being very cheap, this was around the same price you’d expect to pay for seared mackerel in Japan. It wasn’t just the price that resembled that of Ikuna’s home country, though, but the flavor too, as the dish tasted delicious, just as good as she’d expect it to in a restaurant in Japan!

Of course, no trip to the izakaya is complete without a cheeky beer or two, and luckily the Thai izakaya has Asahi Super Dry on tap. One glass cost 135 baht (US$3.84) — again, about what you’d expect to pay in Japan.

Next up were the kushikatsu. They were deep-fried to perfection, and looked absolutely divine.

They didn’t just look good, though; they tasted amazing, too. In fact, Ikuna thought they tasted better than what most kushikatsu restaurants serve back in Japan.

It wasn’t just the kushikatsu that was good, either. Osaka’s famous tonpeiyaki (okonomiyaki with grilled pork) tasted just like it does in Japan. While soy sauce is available pretty much anywhere in the world, okonomiyaki sauce isn’t as easy to get your hands on outside of Japan.

But actually, there’s a certain menu on the item that Ikuna had come in specifically to try. The ‘forbidden’ dish on the menu. So forbidden is this dish that it was actually banned from being served in restaurants in Japan back in 2012, after it was deemed unsafe due to the potential risk of E. coli. But in Thailand, a number of restaurants are still serving it, including the izakaya Ikuna was in.

The dish in question is…

Liver sashimi, specifically raw cow liver, can’t be sold at restaurants in Japan by law, but it was a very popular dish with salarymen back in the day. If you’ve been missing the delicious, uncooked taste of raw beef liver, this pub might be the perfect place for you — just be aware of the potential health risks.

As well as raw liver sashimi, the restaurant also offers rice with a raw egg on top. Such a dish is commonplace in Japan, but in some other countries eating a raw egg is absolutely unthinkable. Ikuna was pretty surprised that she was able to eat raw egg in a tropical country like Thailand, and got so excited that she ended up doing what most people do when they visit an izakaya, and got pretty tipsy.

All in all, Ganso Kushikatsu Ebisu Shoten was like a little piece of Japan right in the heart of Bangkok. Even as she looked around, about 70 percent of the customers in the izakaya that day were from Japan, and the room was filled with people chatting happily in Japanese. Ikuna suspected around half of the Japanese customers were people who lived in Thailand, and for those missing home-country grub, this izakaya must be, as the sign outside said, a paradise for them.

If you’re in Bangkok and are craving for some decent Japanese food, check out Ganso Kushikatsu Ebisu Shoten. If the pub is full to the brim with ossan and doesn’t have any available seats, though, this philosophical Japanese restaurant located nearby might have a table or two free.

Thu Jul 7 , 2022
Japanese cuisine has a lot in the pipeline for vegans and vegetarians. Right from delicious curries to nourishing salads- the Japanese cuisine has something for everyone other than delectable sushi or soul-soothing ramen. The culinary blend of Japan uses mild distinct flavours and often relishes non-spicy food items to gain […]